New research led by the UEA highlights the areas in Europe and North Africa where the construction of wind turbines or power lines is likely to increase the risk of death for migrating birds.

The study used GPS location data from 65 bird tracking studies to understand where they fly more frequently at danger height – defined as 10-60 metres above ground for power lines and 15-135 metres for wind turbines. This allowed the team to identify the areas where these birds would be more sensitive to onshore wind turbine or power line development. 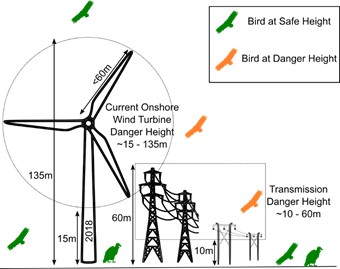 Resulting vulnerability maps reveal that the collision hotspots are particularly concentrated within important migration routes, along coastlines and near breeding locations. These include the Western Mediterranean coast of France, Southern Spain and the Moroccan Coast - such as around the Strait of Gibraltar - Eastern Romania, the Sinai Peninsula and the Baltic coast of Germany.

The GPS data collected related to 1,454 birds from 27 species, mostly large soaring ones such as white storks. Exposure to risk varied across the species, with the Eurasian spoonbill, European eagle owl, whooper swan, Iberian imperial eagle and white stork among those flying consistently at heights where they risk collision.

The study, published today in the Journal of Applied Ecology, involved an international team of researchers from 15 countries and organisations including the British Trust for Ornithology (BTO) and the RSPB in the UK.

The authors say development of new wind turbines and transmission power lines should be minimised in these high sensitivity areas, and any developments which do occur will likely need to be accompanied by measures to reduce the risk to birds.

Lead author Jethro Gauld, a PhD researcher in UEA’s School of Environmental Sciences, said, it was thought to be the first time GPS tracking data from multiple species had been used in this way.

“We know from previous research that there are many more suitable locations to build wind turbines than we need in order to meet our clean energy targets up to 2050,” said Mr Gauld.

“If we can do a better job of assessing risks to biodiversity, such as collision risk for birds, into the planning process at an early stage we can help limit the impact of these developments on wildlife while still achieving our climate targets.

“Our results will help achieve this and in doing so provide better outcomes for people and wildlife.”

Dr Aldina Franco, the project supervisor at UEA, said: “This collaborative study including research from 51 researchers and 15 countries is a great example of where working together can start to answer some of the big questions around the threats that African-Eurasian migrants face on their long annual journeys."

Phil Atkinson, project supervisor from the BTO, said: “The use of high precision GPS devices allow us to study birds’ movements in huge detail. Birds do not respect country boundaries and power lines and wind turbines impact migratory birds across their annual cycle, especially for large soaring birds such as raptors and storks.”

The researchers combined the sensitivity data with the locations of existing onshore wind farms and power lines to identify where the vulnerability hotspots are for these birds, for example the areas where they are already experiencing high risk of collision due to the presence of wind turbines or power lines. 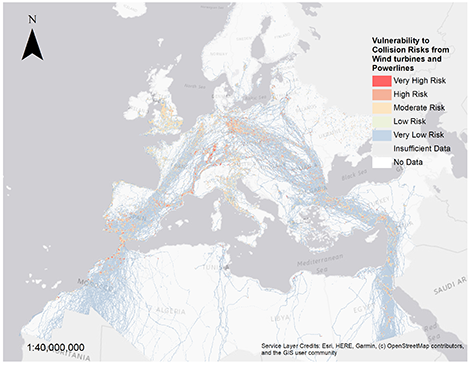 Mr Gauld added: “Our maps can also help target measures to reduce risks where previously built developments are already causing problems. They highlight the areas where existing energy infrastructure is already providing a source of collision risk for these birds. It is therefore a key conservation priority for additional measures to reduce collision risk are implemented in these vulnerability hotspots.

“Such measures can include marking power lines to make them more visible and implementing systems to allow shutdown of wind turbines during periods of high bird traffic.”

The authors acknowledge that transition to zero carbon energy is essential to avoid runaway climate change. European onshore wind energy capacity is projected to grow nearly fourfold by 2050, and countries in the Middle East and North Africa, such as Morocco and Tunisia, also have targets to increase the share of electricity supply from onshore wind.

Alongside this there will be a huge investment in new high voltage power lines, with an estimated fivefold increase in transmission capacity required between 2010 and 2050.

However, they warn the expansion of renewable energy infrastructure required to achieve this poses a challenge to wildlife conservation due to collision and electrocution risks, particularly for birds.

The researchers hope the study provides a method which other researchers and practitioners involved in environmental impact assessments for renewables can replicate as more data from tracking studies becomes available.

Jethro Gauld receives funding from the Natural Environment Research Council (NERC) as part of the NEXUSS Centre for Doctoral Training.

‘Hotspots in the Grid: Avian Sensitivity and Vulnerability to Collision Risk from Energy Infrastructure Interactions in Europe and North Africa’ is published in the Journal of Applied Ecology on April 12.

From testing for plastics in teabags to a Q&A with Countrywise’s Liz Bonnin: UEA’s Green Film Festival is back

Following a two-year pandemic hiatus, the Green Film Festival at the University of East Anglia (UEA) is back from Thursday 19 May - Saturday 21 May, offering...

Not all is rosy for the pink pigeon, study finds

The authors of a major study on the once critically endangered pink pigeon say boosting the species’ numbers is not enough to save it from extinction in the future.

From saving the world’s animals through socks, improving animal nutrition to sequencing COVID-19 genomes and developing a diagnostic device for dizziness, there...

Microplastics are being transported to some of the most remote places on earth by the wind, according to new research involving the University of East Anglia.

From stem cell therapy to regenerating smell receptors, experts at the University of East Anglia have helped develop a list of research priorities for people...

New teaching programme launched to get engineers into teaching Physics

The University of East Anglia (UEA) has been selected by the Department for Education (DfE) to run a new course aimed at getting people from an engineering or...