UEA Music Centre has a dedicated Director of Music, Music Administrator, and Choir Director, who work together to ensure the smooth day-to-day running of the centre. If you have a query or would like to find out more, feel free to pop into the centre, at the end of The Street, UEA Campus, or contact us at musicevents@uea.ac.uk. 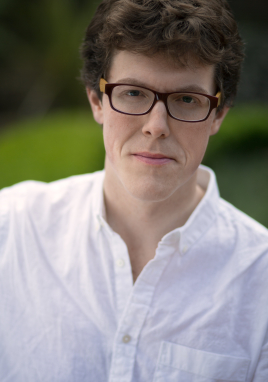 Tom Primrose is a British conductor, accompanist and coach based in London.  He is mainly known for his work in the field of vocal music, working with opera, song and choral repertoire.

He studied at Worcester College Oxford with Robert Saxton and the Royal Academy of Music with Michael Dussek and Malcolm Martineau, during which time he won a number of prizes for piano accompaniment.

He has strong connections with Norfolk where he co-directs Southrepps Music Festival, conducts the Choir and Chamber Choir at UEA, and was formerly Assistant Organist and Director of the Girls' Choir at Norwich Cathedral.  He is on the music staff at Grange Festival Opera in Hampshire, where he worked as chorus-master and an assistant conductor, as well as a repetiteur.  He is also Director of Music at St John's Notting Hill and chorus master for Newbury Spring Festival Chorus and for Cambridge Philharmonic.

Tom has performed in many of the UK's principal concert halls including Wigmore Hall, Sage Gateshead and the Elgar Room Royal Albert Hall. He has collaborated with many of the leading singers and instrumentalists of his generation including Ben Johnson, Susanna Hurrell, Mary Bevan, Christina Gansch (whom he accompanied to her 2014 Ferrier win), Jonathan McGovern, Michael Chance, Sarah-Jane Davies, Javier Camarena, Clare Presland, Jenny Stafford, Richard Dowling, Bozidar Smiljanic, Henry Neill, Timothy Morgan, Adam Temple-Smith, Eloisa-Fleur Thom, Jonathan Bloxham, Brian O’Kane, Ben Baker, Emily Garland, Edward Ballard, among many others.  He has featured regularly on radio and television both in the UK and abroad.

He has also toured widely both as a conductor and pianist, particularly in Italy and Scandinavia, and his choirs have been broadcast in the UK and abroad.  Work in opera has also taken him recently to Poland and South Korea.  He has prepared choirs for Yan Pascal Tortelier, David Parry, Sharon Choa and others and has assisted a number of other conductors.

Tom has been Director of the UEA Choir since 2010, and the Chamber Choir since September 2017.