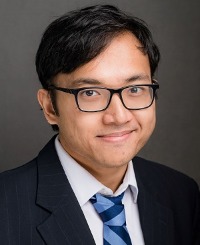 Since completing his BA Psychology, Oliver Alfridijanta has lived and worked in the USA.

We caught up with him to discover what he’s been up to since graduating, and the legacy he left behind at UEA.

Can you give us a career overview?

Right now, as we speak, I am a senior consultant within the company Capgemini.

I do change management consulting, so when companies try to move on to a new system, like from Google to Microsoft, I help to communicate and help people get trained on the new system. This is so that the transition is as clean as possible.

After that, I came back to America where a friend helped refer me to this consulting company and I managed to get myself into the company who put me in change management consulting.

What’s your favourite thing about your current role?

For me it is being able to work on different projects and learn a lot.

As a consultant, you don't have one thing that you're doing to do forever. Every few months I will move to a new project and I get to relearn how I do it all again. I get to apply what I've learned, but better. I get to learn from what a project does and that's something that informs my current knowledge.

What was it that drew you to study Psychology at UEA?

When I was applying to university, I was not living in the UK or the US. I was living in the Middle East, so I went to an international school.

One thing that attracted me to the UK system is that  courses are a bit shorter than in a lot of other places: three years versus four years when you’re an undergrad. That attracted me. I had a discussion with my friend who was in the Norfolk area who told me about UEA and he had good things to say.

What stuck out to you about the Psychology course at UEA?

A lot of things stick out. One thing about UEA Psychology is that there's actually not too many lectures.

There's a set number of lectures and seminars a week, so I didn't expect that so much of it was to do your own reading.

What skills did you learn while studying Psychology that you still use today?

What I like about Psychology is that it's more about social skills. It's more about helping you understand the theoretical background of what people do. I think the social skill set and the soft skills I found were really valuable throughout my time in my career because that's something that you can take with you even if you go to different fields.

You can learn how to do the hard skill of, let’s say, fixing a bike. You can learn that hard skill, but if you do a job that doesn't require fixing a bike, and it's not being used, then at least you have all these soft skills. It continues to be used no matter what field you go to.

Did you do any extracurricular activities while you were at UEA?

I did use the careers services, especially in third year. Mainly about my CV and what I did and what I want to do and how to frame the skills that I learned.

I also did a quite a number of extracurriculars. I was in a bunch of societies. I first started out as a normal member when I was a first year and then the second or third year became secretary and president of a few. I started the Video Game Society and I know it's still there. That's my legacy.

In third year, I started to ramp up even more. I did more internal stuff. I remember being a student Rep. As the years went on, I put in more and I did more extracurriculars. That's what I was talking about, because you can choose how much reading you want to do. I was able to know how many lectures I'm having so I know I have this much free time throughout the day to do stuff. That's why I chose to do so many extracurriculars.

Do you have a favourite memory from the time?

I think doing all the society stuff. Like I said, I started one, so that was really enjoyable, starting something from scratch, and you get to work with your friends.

You get to learn a lot. You get to do what you like and then think about what goes into making these events or what you need. I really enjoy that by itself. It can be tough but it's still so enjoyable.

Any words of advice for prospective Psychology students?

Try to do a lot. I find university to be particularly valuable because you get to have so much more control, even when you're working.

You get to set your own schedule. You get to decide how much you want to do, and I'll say do a lot. Try out different things, get out of your comfort zone a bit. Get in as many experiences as you can.

I think maybe the stakes are lower. Take the liberty to start, trying stuff and failing and learning because you get to a point where failures become higher stakes or maybe less tolerated.

I found that trying out different stuff and learning what I can do, learning what I like to do, to be the most valuable aspect of my time in university, like doing all the extracurricular, starting a new society. This is the stuff that they don't teach you in class.

You chose to interview me in a very good time because a week or two ago I was part of a team that took a look at CVs. I like seeing people with a lot of experience. I like seeing people who have tried to do something, and done a lot of different stuff. Not only does that keep you flexible and keep you your mind sharp, but also it looks good on a CV and when you get interviewed.

I want to reiterate that my kind of story is not typical, and difficult to replicate.

Not everyone has the luxury of doing multiple Master’s degrees. I didn't have to work when I was in university. In fact, as an international student it was hard for me to get work. Some people aren't in that same position and I was very lucky that I could even do all this. After the UK I went to the USA because I already had a resident permit. Not everyone is able to do that.

Employability and careers at UEA