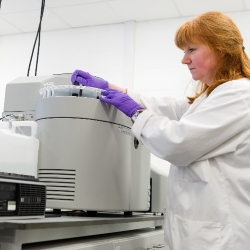 Liz Rix is Laboratory Manager for Research and Related Activities in the Faculty of Science, and, until recently, Chair of the UEA Technicians’ Forum. Having started her first role at UEA at the age of 16, Liz provides some insight into how she attained her current managerial position, and why she chose a career as a Technician.

In terms of career aspiration, Liz credits her childhood fascination with science as a great motivator: “I have always been interested in how things work, and absorbed all things science-based on TV, particularly the Royal Institution Christmas lectures.”

However, it wasn’t the Lecturer’s role that interested Liz. “I didn’t want to teach science, I wanted to be Bryson (Gore) the technician (Royal Institution Christmas Lectures) who provided all of the exciting equipment and made the experiments work. I wanted to be the practical person who solved the problems”. She counts two collegaues in particular as those who have inspired her: “My first boss, Alan Cavill, had an incredible work ethic and I followed his example. Also, a technician called Judy Geeson in BIO who ran the media lab. Judy encouraged me to think outside the box, to ask more questions and not to be pushed into a stereotypical gender role”.

At 16, no one could advise on a correct path to become a technician, so Liz decided to enrol at college to complete A Levels. “At the same time, a trainee technician post was advertised in the School of Biological Sciences at UEA, which sounded as though it might be interesting. Luckily for me, I was offered the job the day before I was due to start college, so I started work instead and did day release at college as part of my training”. As well as having the best of both worlds, she also had a foothold on the technical ladder.

When confronted with hurdles in the workplace, Liz develops contingency plans to work around obstacles.

Whilst something might take me longer than I had hoped, I always work towards my end goal, even if this means my path may deviate along the way; I am not good at being told ‘no’ or that something can’t happen.

Liz experienced professional barriers right from the beginning of her career, as 16 year old girl in department dominated by men. “I quickly learned that I would need to work harder to a) prove my capabilities and b) be accepted as part of the team”.

However, she managed to progress far in her career despite the initial difficulties that came from working in a traditionally male specialism, and would advise other women in her position to “work out what your goal is and go for it. Don’t set yourself a deadline as this could set you up to fail. Always believe in yourself and work for what you believe in, and don’t take no for an answer if you really believe that something is achievable”.