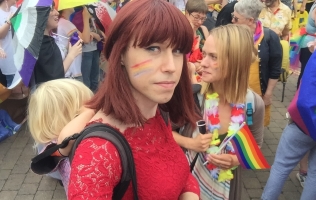 I grew up in an Essex ‘London New Town’ during the 80’s and 90’s. It was a childhood of ignorant bliss, punctured by too many moments of insecurity and lack of self-esteem. I never truly knew who I was, and worked too hard to fit in. I never really let my guard down, and when I did, I was quite often teased and bullied. There was nothing in my life to suggest that being queer was normal, nor were there any visible examples that I could identify with. Discovering my identity (the cliché ‘penny dropping’ moment) much later finally gave everything clarity and perspective. Memories stretching back to when I was five years old in Reception Class, when I wasn’t allowed to choose a fairy costume for dress-up, started to make sense. I have always been transgender and queer, just I was ubiquitous caterpillar. Going to UEA as a student in the early 2000’s was my chrysalis stage. I started to discover myself and find my place. But it wasn’t until very recently and years later that I emerged from the cocoon.

The University of East Anglia is an integral part of my identity. I have always found UEA to be welcoming and inclusive. Not once, neither as a student (Environmental Sciences then Education PGCE) or a member of staff did I feel that I was out-of-place. Quite the opposite.  Incidences which can be described as queerphobic or transphobic are the rare exception and to me feel totally out-of-place, and I’ve not felt unsupported when they happen. Members of the UEA Alumni team know me very well – I’m a bit of a pest who is always buzzing around willing to help, with pride, with outreach and support activities. I’ve also helped out with the hard-working peeps in AQO as invigilator, reader and scribe. That is noteworthy because a couple of years ago that was the first paid-job I did after coming out publicly as trans and started socially transitioning. The AQO team were just awesome and accepting without question. All this, and being a member of UEA Staff Pride truly makes me feel like a member of one big loving family.

I’m now in Admissions, Recruitment and Marketing  working in outreach, being a very visible representative of UEA through working with children and high schools. The fact that I got this job being a very visible trans person is, in itself, a statement of UEA’s inclusiveness. On the back of my teaching career, I also maintain an educational blog for educators, writing articles, performing poetry and producing YouTube videos – so my visibility extends into the virtual world and internationally too (I’m not hard to find via a Google search!). Being visible is exceptionally important to me. I have the privilege to be so, and I hope it provides strength and hope to those who feel they either can’t or don’t feel ready to be visible themselves.