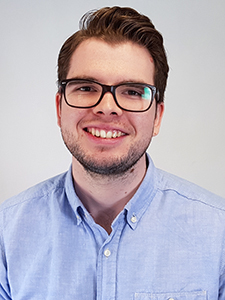 Bio: I graduated from UEA with an undergraduate degree in Biomedicine and a strong interest in following a career in biomedical research. I subsequently stayed at UEA to start an MSc by Research, comprising a 12-month lab-based research project investigating cellular signalling in monocytes, a type of immune cell.

I'm Jonny Micklewright and I've been researching calcium signalling in monocytes which are a type of immune cell. This has relevance in the immune system, cell signalling and cardiovascular disease as well.

Why is your research important?

I've identified new findings that are relevant to increasing the understanding of a certain receptor in immune cells and therefore this helps us understand human health and disease even more and therefore it could help the population.

What could your research mean in the real world?

Finding new research and results about something you're passionate about is brilliant, but also when you do that for the benefit of the population and understanding disease it's really rewarding, especially when you're up late analysing data or something like that.

What's been your favourite moment so far?

I was asked to present at an international scientific conference and that was really, really brilliant because I could talk to well-regarded scientists about my work and their work. And on top of that it was also a fun experience, so I'd highly recommend doing that if you get the opportunity.

A day in the life

8am: travelling to campus

I would usually cycle into UEA as I don’t live far away. I used to live at Keswick Hall in a rented flat, and the bicycle journey from there was lovely as Keswick was surrounded by countryside even though it is close to Norwich.

9am: preparing for experiments

As long as I was doing enough work my supervisor allowed me to be flexible with organizing my own time so there was no strict time I had to be in the lab for, but I usually arrived between 9 and 10am anyway.

A big part of conducting experiments in research is planning and preparation. So the first hour could be taken up by deciding what experiments to do, how many cells would need to be taken from culture, and making up necessary buffers and reagents.

Throughout my time I have done many different types of experiments, which can take different lengths of time. The most common experiment I conducted, however, was a calcium imaging assay which took approximately 3-3.5 hours, which worked well for finishing at lunch time.

I worked with monocytes most of the time which are kept in sterile culture in a separate room to the main lab and experiments using these cells would begin by taking a sample of them in a cell culture hood. You need to use aseptic technique at this stage so you don’t infect the cells, and having hay fever in the summer can make this a bit challenging as I’d want to sneeze every two minutes!

After taking a sample of cells from the main flask I could go back to the main lab where I would make use of the centrifuge to separate the cells from the media. The rest of the experiment would take place on my bench, and fortunately there would be times where the cells would be left to incubate with compounds and so I would have a break. During this period I could do a number of things, such as planning for later experiments, data analysis or preparing for weekly meetings (you know, all the fun things!).

I get on really well with everyone in my lab group, and if we happened to time our experiments with one another well, we would have lunch together. This would usually just take place in the communal kitchen/eating area near our office upstairs from the lab, or sometimes we would eat outside or in one of the campus cafes. It was common place for some of us to sit with timers on the table during lunch so we would know when we would need to return to the lab to perform the next part of the experiment on time.

On Mondays at 2pm our lab would have weekly meetings where we would each stand up and present our recent results to the group and our supervisor. This was casual so there was no pressure to present perfectly, but it did improve my confidence in communicating my findings, which is important in science. The meetings were very useful for getting everyone’s opinion on my work and gaining new ideas for my research.

I was given the opportunity to supervise an undergraduate student’s final year project, which was very rewarding. During this time, I would assist them with experiments on the afternoons if need be. This meant I completed my own work on the morning to ensure I wasn’t neglecting my own project during supervising.

Aside from the above, the afternoons would usually consist of another experiment.

If I hadn’t had time during the week to prepare my data and PowerPoint slides for the Monday meeting, I would do these on a weekend. Additionally, I had the experience of presenting a poster of my work at a scientific conference (which is a lot more fun than it sounds), and I completed the poster ahead of it over several weekends.

Although PGR students are notoriously busier than UG students, we do still make an effort to socialise. We have a good working atmosphere in our lab and I’m good friends with everyone there. We’ll go for meals on birthdays and even do something like bowling or laser tag every once in a while just as an excuse to socialise outside of lab meetings.

Some people say that Norwich is ‘that place where no-one goes’ (due to general location and lack of a motorway, apparently), but as someone originally from North Yorkshire who first moved to Norwich in 2012 for my undergrad, it’s become a place I don’t really want to leave. There’s plenty to do in the Norwich on weekends and evenings – there are many great shops, bars, restaurants etc. and as a bonus the surrounding rural area has beautiful walks, which I enjoy just as much as having a pint in the city (sometimes). I have even caught the bug of supporting Norwich City Football Club (for my troubles) and attend all the home games.

Finally, the UEA Sportspark has great facilities, and I particularly enjoy going to the gym and playing badminton there.