It is tempting to think that the way we recount an event is clear and unambiguous, yet tiny differences in our language can reveal – or obscure – the reality of what had happened.

In a unique project UEA linguist Professor Luna Filipovic is analysing real life police interviews with witnesses, victims and suspects in order to identify communication difficulties that arise in the interview procedure and reasons for communication breakdown.

Our ability to tell about the events we have seen is something we learn from when we are small children.

We quickly discover that the language we choose to describe events is crucial to how our role within a particular scene is perceived.  A few carefully chosen words can convey a wealth of information as to the purpose of our actions – and help separate the accidental from the deliberate.

Yet language can also affect how we fundamentally perceive and remember events: the phrasing used to describe how something happened colours our perception of those events.

Recent research has questioned if the way we subconsciously interpret language also affects how we apportion blame? If so, the simple process of ‘telling’ and ‘understanding’ becomes far more problematic when it comes to the judicial system.

In the first project of its kind in the UK, forensic linguist Dr Luna Filipovic is taking a holistic view of investigative interview analysis, dealing with precise points of conflict and misunderstanding in language use.

There is currently a lack of comprehensive evidence-based analysis of police interview process at a detailed, linguistic level.

Working on real data from several UK constabularies, a team of researchers led by Filipovic is looking at the investigative interview process from multiple angles in order to get a better overview of the multilayered process of information exchange in police contexts. This research is being carried out as part of long-term project TACIT: Translation and Communication in Training, within which  one of the key research outcomes is the practical application of the results in professional training.

“It is not just the differences between languages and problems of translation that create communication difficulties in investigative interviews. There is difficulty and ambiguity even in monolingual interviews.” comments Filipovic. “For a police interviewer how exactly do you phrase a question in order to receive an answer that is unambiguous, where the answer must not be implied but definitively said, in order to prove beyond reasonable doubt a person's innocence or guilt?”

Unlike in the US, UK police are not required to create a bilingual interview transcript that contains the original language of the interviewee. The written record of the interview only consists of the translated English version, and Filipovic points out the many subtleties and cultural differences that can be missed in this approach. Furthermore, translation can introduce its own interpretation into the mix because their absolute translation equivalents may not be available.

One linguistic area where this is likely to cause misunderstanding is agency - the notion that reflects who the causer or the initiator of an event is, usually the subject of a sentence.

Unlike in English there are many languages where specific verb constructions explicitly indicate whether someone did something on purpose or not. The English language does not oblige its speakers to discriminate constantly between intentional and non-intentional acts. For instance, 'I knocked the bottle off the table' or 'I dropped the pen' does not explicitly express whether ‘I’ did it on purpose or not. However, Slavonic languages (e.g. Serbo-Croatian) and Romance languages (e.g. Spanish) have different constructions, specifically communicating someone’s intentions. The expressions from these languages are habitually translated in English using constructions typical for English that do not offer precise intentionality information.

Filipovic’s research has demonstrated that speakers of Spanish, for example, consistently use different constructions in order to signal whether something is done on purpose or not while English speakers tend to leave that piece of information unspecified since it is not obligatory to do so in their language.

The research, carried out by Filipovic in the United States, has revealed that the consequences of these linguistic differences can have a major impact in real-life situations.

Did She Fall or Was She Pushed?

In one particular case in California where Professor Filipovic carried out her fieldwork, a police interrogation focused on whether the Spanish speaking suspect, who was carrying his unconscious victim down a flight of stairs was implicated in her death when she sustained injuries as a result of hitting the stairs. Was the victim dropped, did she slip out of his grasp or did she fall? The suspect’s interview, conducted via a Spanish interpreter, was to prove a tricky linguistic knot to unravel. 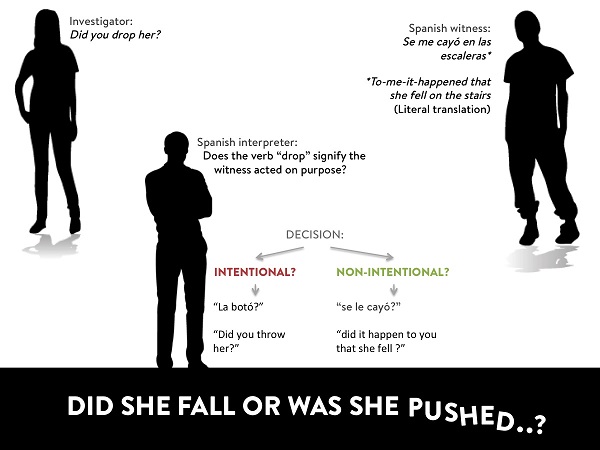 The witness’ explanation “Se me cayó en las escaleras” carries a literal translation of “To-me-it-happened that (she/he/it) fell on the stairs.”

So when the investigator asked "Did you drop her?" to clarify events the Spanish interpreter had a choice to make: was the verb “drop” used to refer to an act that was intentional or non-intentional?

It was evident throughout the interview that the verb “drop” in English was used sometimes to indicate an intentional act but sometimes the exact opposite, a non-intentional act. The interpreter was not able to always guess which one the investigator had in mind and he also translated both intentional and non-intentional Spanish construction using the verb “drop” which is underspecified with regard to intentionality but not ungrammatical in English. This led to the suspect apparently admitting intent in translation whereas he did no such thing in the original Spanish.

“Police interviews should clearly not depend on interpreted information to this extent,” points out Filipovic.

“Police investigators need to be made aware of the relevant language contrasts and advised to re-frame their questions in order to avoid misunderstandings, or worse, miscarriages of justice.“

Such research reveals that this is an area where language professionals such as interpreters and translators can work together with police officers to clarify interview procedure for example when an interruption by an interpreter is warranted to avoid or remedy conflict due to linguistic or cultural barrier. Efforts in that direction are being made through collaborative work on a (hopefully nation-wide) police protocol for multilingual interviews to which Professor Filipovic has contributed.

Filipovic and her colleagues are aiming to produce a tool kit for police interviews, which would help to detect and prevent the specific problems that can arise in translation-assisted police communication as a consequence of cultural or language differences.

The project as already been endorsed by the National Investigative Interviewing Steering Group and the What Works Centre for Crime Reduction, led by the College of Policing has already added the project to its UK Research map.

Looking at both monolingual and bilingual interviews, Filipovic and the team are helping to train professionals such as investigators and police interpreters in practical techniques such as creating an interview transcript. The research that Filipovic has carried out so far in the UK and overseas has already translated into practical training courses and policy drafts for interview transcript production.

In a world where native speakers of Mandarin and Spanish now far outstrip English, this research has clear importance to the future development of the justice system, especially when something you say (and may later come to rely on) could be fundamentally misunderstood.

College of Policing's What Works Research map of the UK