The Met Office and the University of East Anglia (UEA) are today announcing a series of key improvements to their long-running global temperature dataset, HadCRUT.

HadCRUT is one of the world’s leading datasets of global temperature and it contains data stretching back to 1850. Today’s announcement marks the release of the fifth major iteration of the dataset.

•    Updated adjustments to handle biases between the different ways of measuring sea-surface temperature used throughout the observational record.
•    A significant increase in the number of weather stations used over land.
•    Using statistical methods to extend the data set’s coverage in the early record and in areas that are still data-sparse today, such as the rapidly warming Arctic. This provides more accurate estimates of global, hemispheric and regional temperature changes.

This is 0.16 °C more than in the previous version of the dataset.

The previous version, HadCRUT4, showed less warming than other global temperature datasets. HadCRUT5 is now more consistent with these other datasets during recent decades and shows slightly more warming than most of them do over the full period since 1850.

Dr Colin Morice of the Met Office said: “Each of the main global temperature datasets, including those by NOAA and NASA, are compiled separately using different methods, but each is based on a finite amount of global temperature observations. The range of approaches results in very similar estimates of overall warming and provides scientific confidence in the changes seen and also reinforces the fact that the world has warmed considerably since the mid nineteenth century.” 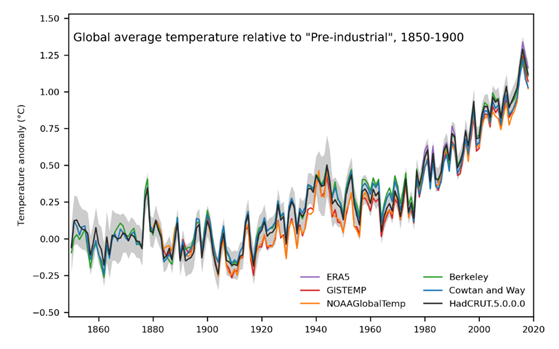 Image above: Global average temperature (°C) relative to the average for 1850-1900, computed from a range of global temperature datasets.

Prof Tim Osborn, Director of Research at UEA's Climatic Research Unit (CRU), said: "We made our first estimate of global warming in 1986 and since then we have regularly improved our data and refined our analysis. This new major update to our global temperature record sees the estimate of global warming from 1850 to 2018 revised upwards, from 0.91 to 1.07 °C. Climate change has not suddenly got worse: instead, we have an improved estimate of how much warming has taken place.”

The main contributor to warming over the last 170 years is human influence on climate from increasing greenhouse gases in the atmosphere. The effects of human-induced climate change are not limited to surface temperature. Warming of the climate system is seen across a range of climate indicators that build a holistic picture of climate change far beyond our expectations from natural variability across the land, atmosphere, oceans and ice.

A companion paper describes an updated version of the land-only global temperature dataset, CRUTEM5, which is produced by UEA, the Met Office and the National Centre for Atmospheric Science. Prof Osborn said: “Climate science predicts that the land areas of the world should be warming faster than the ocean areas and our temperature datasets confirm this. While the full global temperature rise shown by HadCRUT5 has now reached around 1.1 °C, the CRUTEM5 dataset shows the average over land has warmed by 1.6 °C since the late nineteenth century.”

HadCRUT5 currently includes data for 1850-2018. This will be updated to the end of 2020 when measurements for the full year become available.

The papers are published in the Journal of Geophysical Research: Atmospheres on 15 December, 2020.

Lockdown saw people in the UK eating less fruit and veg, getting less exercise and drinking more alcohol – according to research from the University of East Anglia.

Covid-19: How five days of ‘liberty’ ruined the November lockdown

The UK-wide November lockdown didn’t work as well as it should have because too many people made the most of their liberty in the run-up to it – according to new...

Every children’s football magazine and over 40% of collectible stickers and cards feature gambling logos, despite the ban on marketing betting to children, new...

With the next ten years seen as being a profound and critical decade for climate change, UEA has brought together two of its most celebrated fields of study,...

The natural resources of one the world’s most biodiverse countries are the key to its economic future, according to new research led by the University of East...

Universities should keep their windows fully open and students shouldn’t share personal items – according to new University of East Anglia research into reducing...

The celebrations for the 50th anniversary of the Creative Writing programme at the University of East Anglia (UEA) will continue apace in 2021, with tickets...